Ralph was raised in Palmetto Florida. He attended Manatee County schools and received his B.A.E. in Education from the University of Florida in 1964. He graduated from Cumberland College of Law in 1967 and began private practice in Manatee County in 1968. He served as an assistant state attorney and as a municipal judge.

In 1972 Ralph was elected to the Florida House of Representatives. He served on every major committee and won many legislative awards culminating in his election as Speaker of the House in 1981. While serving in the Legislature, Ralph was an integral part of the revisions of the Florida Criminal Code, the Evidence Code and the Probate Code. As Chairman of the Committee he had to carefully evaluate the existing law, the relevant cases and the public policy questions involved in the revisions.

Since 1982, Ralph has maintained a successful law practice in Tallahassee, Florida. 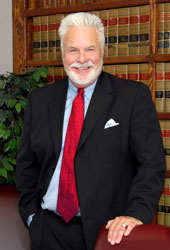